As a wise Peanuts character once sang, Christmas time is here. For me, that means time to break from school, college applications, and even (gasp!) the internet, for a brief while, to celebrate the season. This in mind, here's what's going on as far as my collecting goes:

I'm still looking for cards to complete sets. I'm short 9 cards for my Nolan Ryan insert set, a couple hundred for my 2012 Panini Triple Play set, and perhaps 400 or so for my 2003 Topps set. If any blog readers and traders would like to help me put these away, I would love to have some assistance!
Which leads me to my next item. My Trade Bait page has always been a bit spare, so I've been doing some re-stocking. Right now I have an under-construction sign up, but I have been taking in some new cards. So look for some new trade bait and "Up-for-grabs" posts in the future.


Last, I need some real help for my Player Collections. I credit you bloggers for getting me to the point where I am nearly out of space to hold all of my Chipper Jones, Dale Murphy, etc. cards. For those of you who collect a number of players, how do you store your PC cards, coins, and other memorabilia? Right now, I have all the cards stored in a plastic cassette tape case. It works and fits okay, but I know it really isn't ideal. I'll leave you with that question.

Thanks for reading, and Merry Christmas!
Posted by Chunter at 2:37 PM No comments:

GCRL of blog garvey cey russell lopes is giving away a 1952 Topps card in his Steve Garvey birthday contest! Check it out!

Trade with the Card Raven and Listia Winnings!

Did you buy a lottery ticket this week? I didn't, but next time I might be able to if my state lawmakers get their way. Honestly, I've viewed lotteries as a sort of Charlie and the Chocolate Factory-style Golden Ticket chase, for grown-ups. Anyway, rather than buying candy bars, I've spent the early holidays applying for college scholarships, and bidding for cards on Listia. Merry Christmas to you. Here are some of my recent wins. 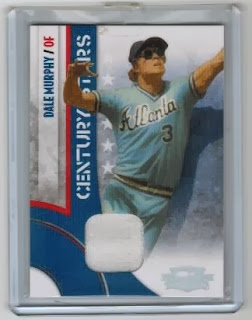 To begin, here's a nice Dale Murphy relic. Bobby Cox was enshrined in the Hall of Fame by the Veterans Committee a couple of weeks ago; that's the only chance for Murphy to get in now, and it's an outside shot too. If it weren't for those darn knee injuries, it might have been different.

Speaking of injuries, CBS Sports is now plugging for sketch cards of bizzaro injuries. I think my favorite was Glenallen Hill, who I will now always imagine crashing into a glass table while dreaming about being covered with spiders. 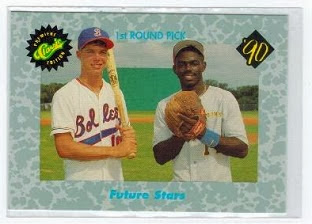 I snagged a card of a young Chipper Jones (in his Bolles Bulldogs high school jersey) and Rondell White, apparently on a spring training field with a makeshift Green Monster (?) in the back. 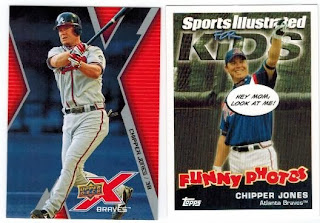 A couple more Chipper Jones cards in a lot I won...it seems like SI for Kids used to do more baseball card tie-ins a few years ago than they do now. Also, it would be an interesting blog contest idea for someone to collect that Funny Photos set and re-caption all the cards. Just a thought. 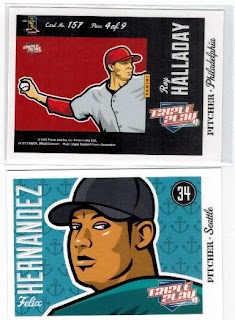 And a couple of Panini Triple Play wantlist needs. I still need a ton of cards from this set, if you would like to help me out there. 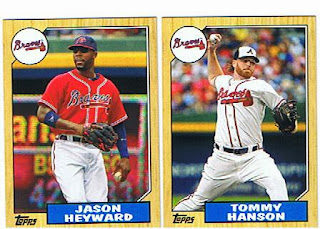 We're now to the Card Raven's package. For my part, these 2012 Topps minis were gold. Braves cards plus 1987 Topps = gold, in my opinion. 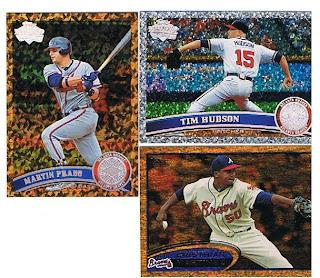 May not be gold, but they do glitter. And (at most) two years after these cards were made, none of these players sit on the Braves roster. 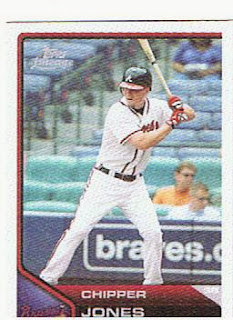 This was one of those 2011 Topps Lineage cloth cards. My guess is Chipper was either batting in some Spring Training game here, judging by the absent seats. 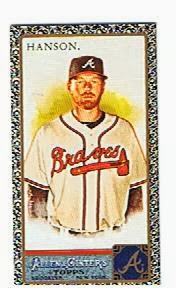 A Tommy Hanson black border from 2011 Ginter. The bearded redhead was nontendered by the Angels after posting an ERA over 5, making the Hanson-for-Jordan Walden trade last year look pretty decent in retrospect. 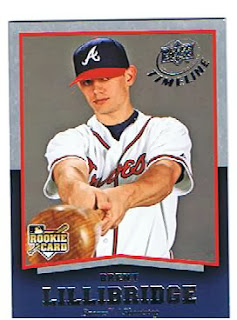 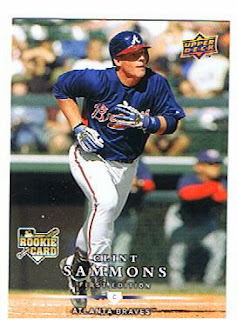 Let's play a little, Where are they now? with these guys. Sammons, at last check had had knee problems (like Dale Murphy) and was a catching prospect (like Dale Murphy), so he became a catching coordinator for the Marlins farm system (unlike Dale Murphy). Lillibridge just got picked up, along with Kevin Kouzmanoff (remember him?) off the scrap bin by the Rangers  a week ago. 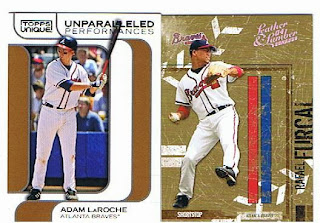 I'll take numbered cards, especially from sets I don't have any cards from. 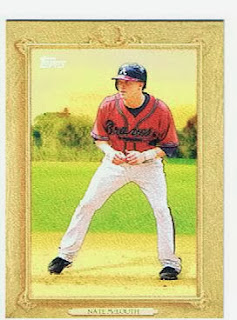 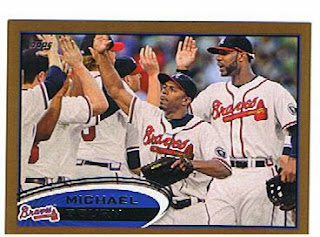 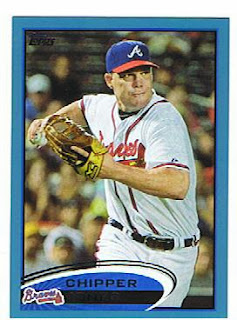 Blue and Gold parallels are great too. As a military brat, I'll say these are in honor of the Navy Midshipman, who beat the Army Black Knights Saturday for an unprecedented 12th straight rivalry win. To put the streak in a little perspective, the 12-year span of victories over Army is more than half of all the Navy players' lives. 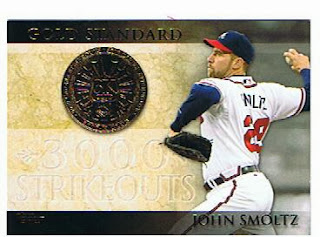 I'll close out with one of the finest closers the Braves have had in recent history. I've been playing a copy of an old MLB Playstation game the past few weeks, rosters current as of 2001, and I had Smoltz come out to relieve the other day, and I believe he won it. I really hope to see Smoltz in the Hall in 2015.

Thanks to Card Raven and my Listia friends for the cards!
Posted by Chunter at 4:04 PM 3 comments:

Overheard in the Target Card Aisle...

Enter little girl and who I would presume to be her father into the card aisle, gaming section. I'm on the other end, eavesdropping but otherwise minding my own business.

Little Girl: "Remember when I used to like Pokemon cards?"

Little Girl: "Do you remember-have I told you what a brony is?"

Little Girl: "It's a man, especially a grown man, who likes that show [My Little Pony, clearly]."