Trade With Weston of Fantastic Catch, Part One!

I'm back. Undaunted by summer allergies and a weekend trip to Montgomery (post upcoming about that), I'm here to recount a fantastic series of trades with Weston of blog Fantastic Catch. Since he and I have swapped a lot of cards, I'm going to break this up into a few posts. I have to say it's been odd not blogging for a couple of weeks. Last night, I think I dreamed of trying to hold another contest. Anyway...

Included along with the following cards were some Sports Illustrated Braves baseball preview article clippings. A while back, SI famously did a baseball preview on Sidd Finch for April Fool's day. As I prepare to fly to Boston this weekend for the Harvard journalism camp, I thought it was cool that Sidd also reputedly attended Harvard. 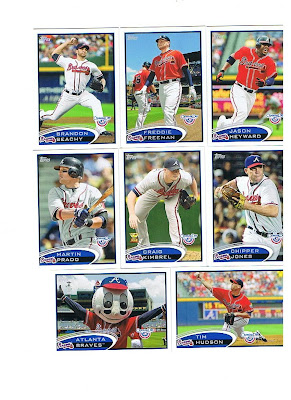 What would improve Topps Opening Day? As has been chronicled by other blogs, it's basically a mimicry of the base set, only with different inserts and photos of Tim Hudson (hoping he gets well soon, by the way). If Opening Day is going to be released after S1, I'd agree that the two products need to be merged. What do you think? 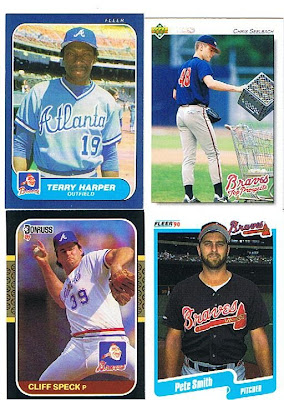 Some goofy cards I found. Aside from the blank stares of Harper and Smith, something seems odd about Cliff Speck's photo. And apparently, Chris Seelbach lives on the baseball field. 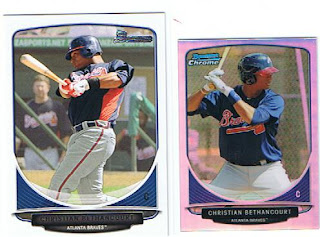 These were some nice cards of Christian Bethancourt, now toiling in the minor leagues for the Mississippi Braves. If the Braves ever change their minor league team names to not reflect the parent club's, I vote for changing Mississippi's to the Queens. If you know what I mean... 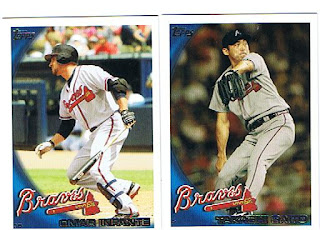 Some long-lost 2010 set needs! Still looking for J-Hey's rookie card and the Dale Murphy SP...if you have these available for trade, let me know! 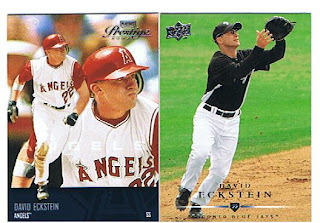 Last, some Eckstein PC needs! Eck recently surfaced as an assistant coach for the USA U18 team for the World Cup in late August. It'll be interesting to see whether Eckstein becomes a coach in the major leagues down the road. I wonder, Can he or anyone inculate hustle? What about grit?

Thanks to Weston for the cards, and look for another post sooner than in two weeks!
Posted by Chunter at 11:39 AM No comments:

Harvard, Dale Murphy, and the City of Detroit (Trade with TMV) 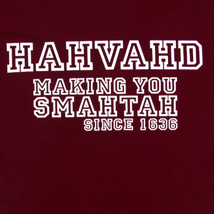 In other news, I've been accepted to Harvard....'s summer journalism camp. I'm pretty pumped, and expect nothing less than to run into Jeremy Lin, Mark Zuckerberg, and Ryan Fitzpatrick. (Okay, maybe not Ryan Fitzpatrick.)

A bunch of Harvard MBA students hit up the Motor City last week to help local businesses as part of a nationwide tour. Despite their best efforts, and having a pretty darn good baseball team this year, the City of Detroit declared bankruptcy. And yet their good baseball team carries on, helped by triple king Prince Fielder and fellow Michiganders, like Dennis of blog Too Many Verlanders.

One of the cards Dennis sent to me in 2 successive trade packages was this Dale Murphy Panini jersey card. Behold it in all its unlicensed glory! 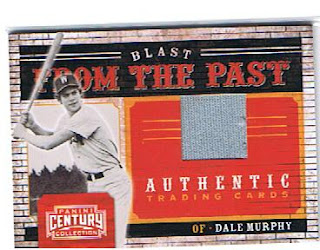 It's numbered to 99, according to the back side: 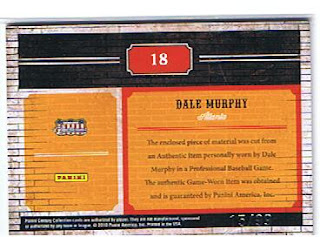 Now, along with my other two Murphy cards I had (below), I've completed a Murph trifecta! 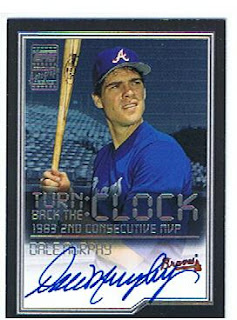 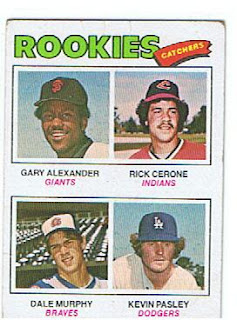 Of course, if you have any other Dale Murphy autos, rookies, or jersey cards, feel free to ask me for something in a trade! I'd love anything not on my Have List to add to this collection! 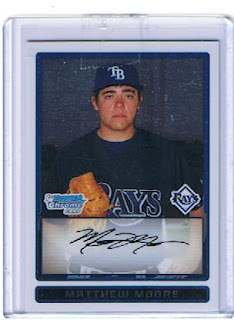 Of course, that Dale jersey card wasn't all Dennis sent me. He also shot me a Matt Moore Bowman, 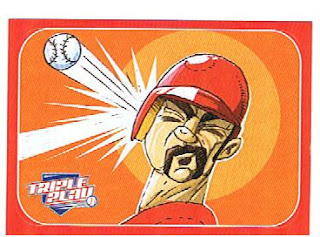 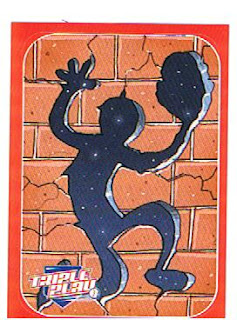 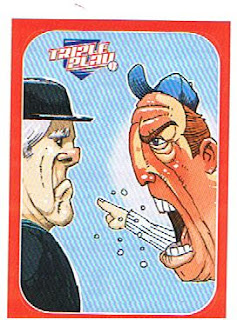 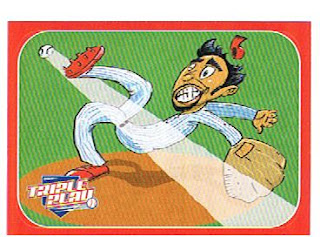 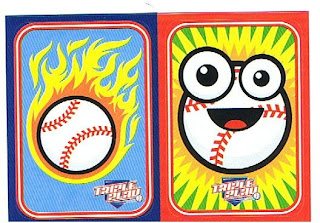 Some bizarre Panini cards (which I really needed for my set), 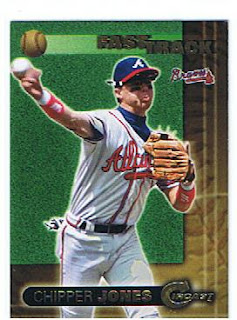 And a fuzzy Chipper Jones card! Now, I'm not being weirdly sentimental when I say that. This card has a texture like velvet on the green part. Representing...grass? I've gotta say I've never touched grass that felt like that. I did a little digging, and fellow blogger PunkRockPaint made a funny parody of this Velvety Chipper:
And so there you have it. Dennis sent a bunch of other stuff too...but time was against me. Go visit his blog and make a trade with him, he's super cool about making them. In the meantime, I'll be working on my Boston accent. Thanks to Dennis for the trade!
Posted by Chunter at 10:12 PM 1 comment:

Right now I'm heavily in the midst of my college pursuits. Now, that's normally not how you'd expect a sports card blog post to start, but this isn't a normal sports card blog. I say that about college to say that I figured it would be worthwhile to chronicle the more interesting ones. It took me all of an hour and a half to create a new graphic for the sidebar, and then scrap it completely in favor of my favorite photo. The point was to tag college posts. If it flops, maybe it'll at least be funny.

Onto the Giants allusion I made in the post title. In the wake of a Tim Lincecum no-hitter, I'm offering a a nice-sized stack of some pretty decent Giants cards I would like to see go to a happier home. I'm looking for any cards off my wantlists or PC's in return, or maybe some cards for my steady trading partners. If you are a Giants fan and are interested in some cards, don't hesitate to leave a comment or drop an email in my inbox! My email address is in my Blogger profile sidebar. Back with more soon!
Posted by Chunter at 9:59 PM No comments:

Email ThisBlogThis!Share to TwitterShare to FacebookShare to Pinterest
Labels: college, giants, tim lincecum, trade with me!

What do All-Star Freddie Freeman and Ross Perot have in common? (2013 GQ from Andrews BB Cards)

Recently Andrew of the ABC blog held a group break for some 2013 Gypsy Queen. I never buy the stuff in packs, but the lure of getting a bunch of Braves cards without having to get rid of doubles? Too good to resist! Andrew gave me the Braves and the Astros in this break. See what I got. 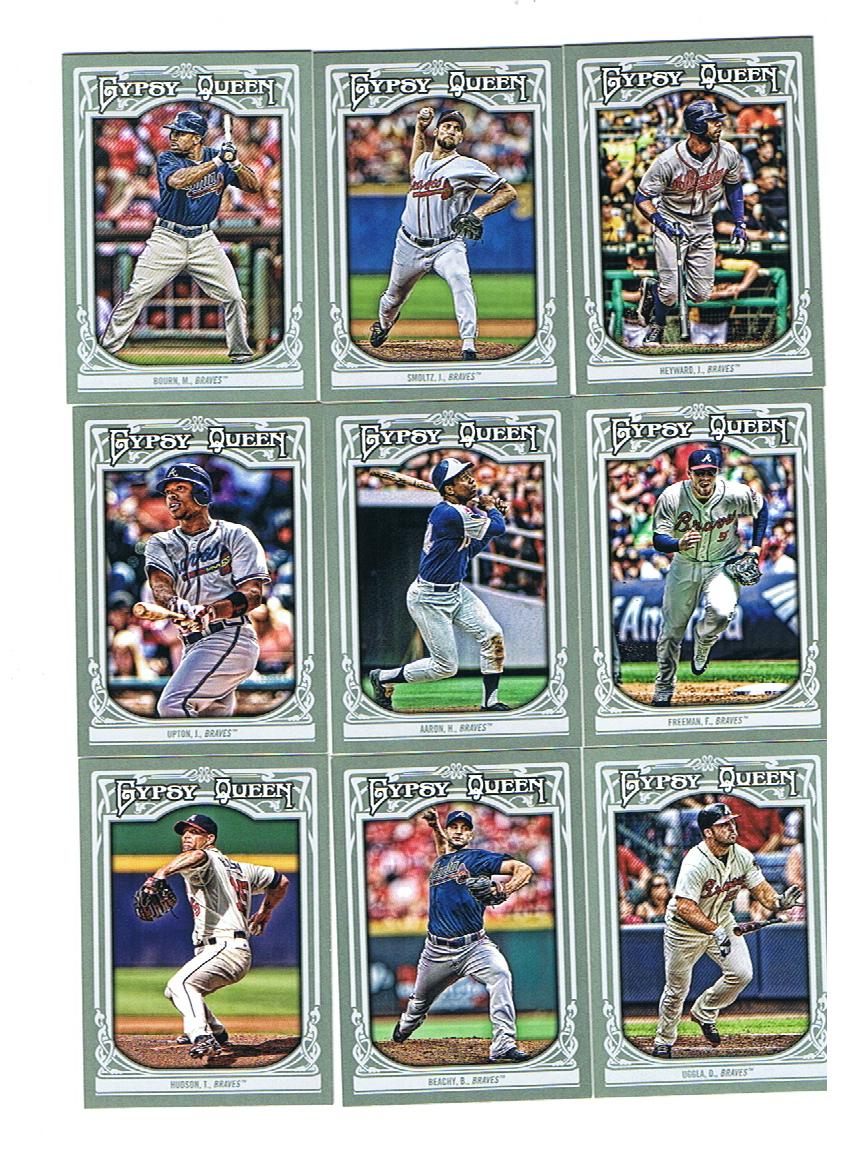 A set of nine, including 19.7 million-vote receiving Freddie Freeman! To put that in perspective, online ballot-stuffers aside, that's about 15% of the 2012 presidential popular vote. So if Freeman had run as the nominee of the Braves Party, he could have tallied about the same numbers as Ross Perot in '92!
---> https://en.wikipedia.org/wiki/United_States_presidential_election,_1992#Detailed_results

Back to the GQ cards-I like the design okay-the backgrounds look like the color of money. When Topps said they recycled wrappers, they didn't mean they recycled dollar bills to make cards too, did they? 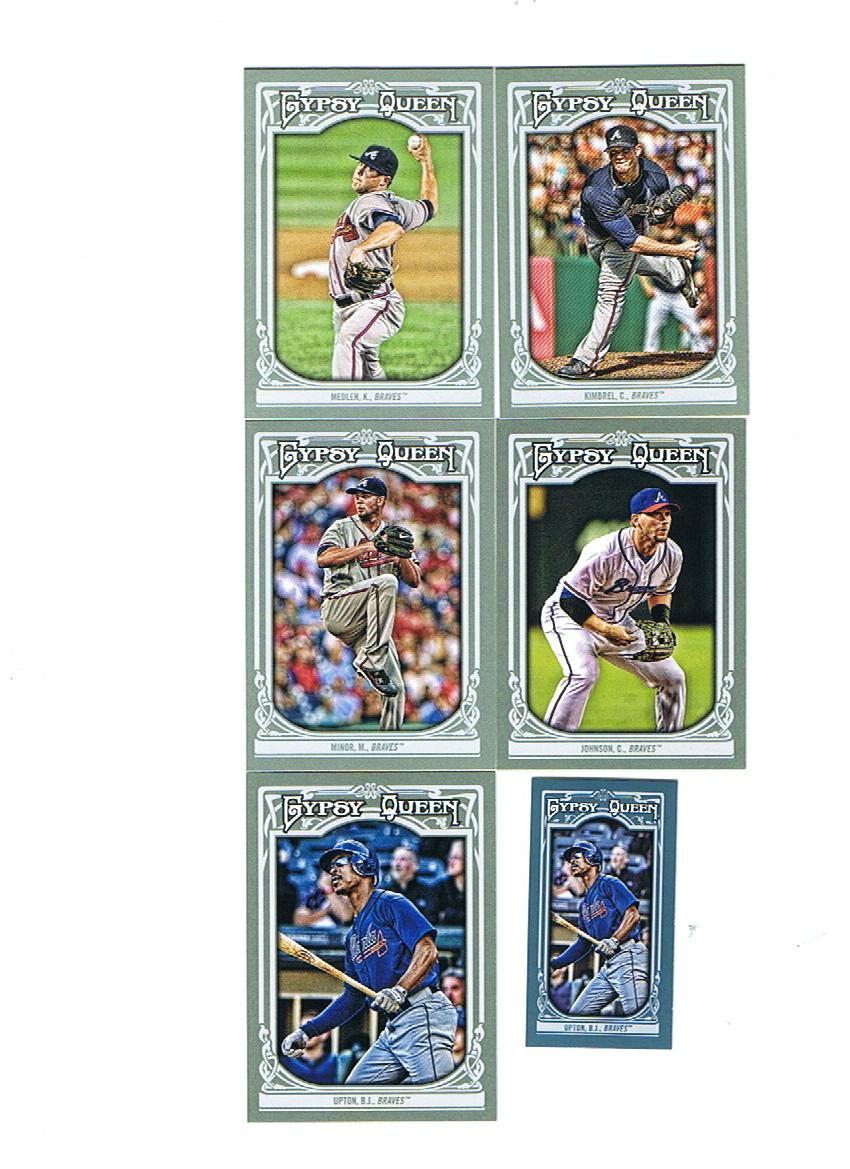 A card of BJ and his miniature, as well as an airbrushed CJ, and another All-Star Kimbrel. Nice stuff! 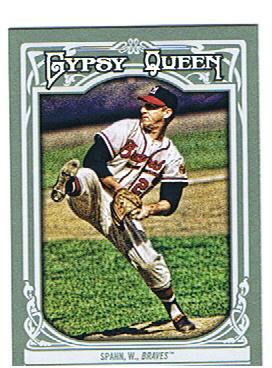 A nice shot of Spahn, though the zombie-esque skin kind of leaps out at you here. What do the backs look like? 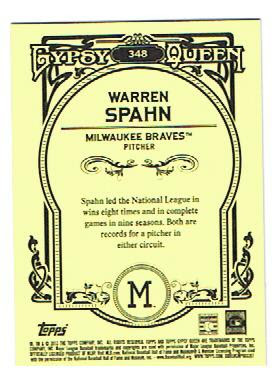 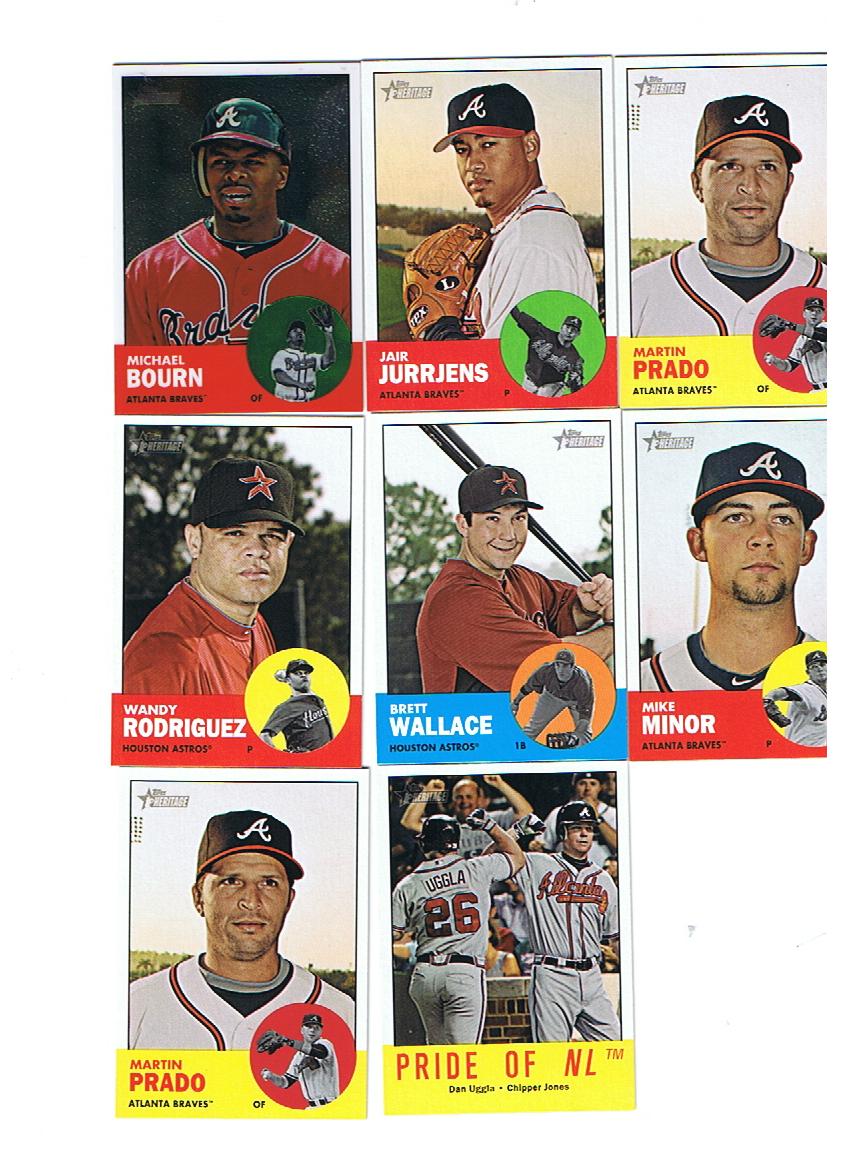 ﻿Remember how I said I had the Braves and the 'Stros in the break? Well, I didn't get any GQ Astro cards. I'm perfectly happy to get all Braves, but Andrew said that wasn't enough. He generously threw in a bunch of Heritage Braves and Astros, including a chromie card of the now-departed Michael Bourn. For going above and beyond the call of duty, I thank you Andrew. Thanks for the cards!
Posted by Chunter at 11:55 AM No comments: