Back in the summer, I posted up the first part of some trades I've made with Wes of Fantastic Catch. I've been alternately too lazy or too busy (mostly the latter) to post these up, mostly because, alas, I have joined the online site Listia. As better writers have chronicled, Listia allows you to take other people's stuff (with computer money) for free (in real-life money). I haven't listed many cards yet, but if you're interested in some Miami Dolphins swag, find my auctions here.

I didn't scan them, but Wes also sent several Sports Illustrated clippings of the MLB season preview issue. The Braves surprised a lot of folks by beating out the Nats for the NL East this year, including SI. 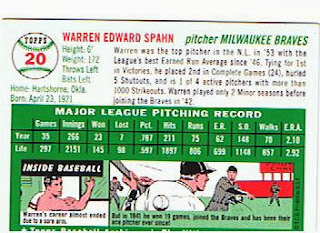 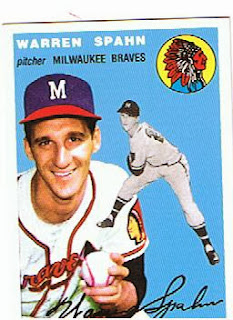 Obverse and reverse of a Warren Spahn reprint card. Classic uniforms plus cartoons of a guy swinging at a pitch over his shoulder? Too good to resist. 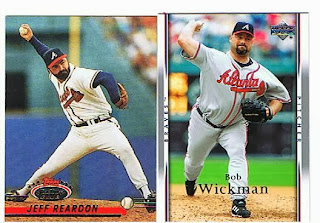 Braves beards, past and present. Fun fact, courtesy of Wikipedia: Bob Wickman was good at throwing sinker pitches, which he credited a childhood farming accident (involving a fan?) with helping him to do. 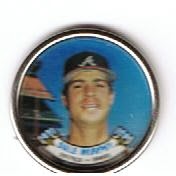 This was a 1988 Topps Coin of half-smiling Dale Murphy from my and Weston's meetup last spring (first blogger-to-blogger one for me). You think he looks bored now, just be glad he's not on a cheap non-metal Topps Chip(z?).

Some nice photos for these cards. I really like the shot of Heyward sliding. J-Hey hasn't had near as many steals as last year, sitting at 2 with a handful of games to go, compared to last year when he had 21. 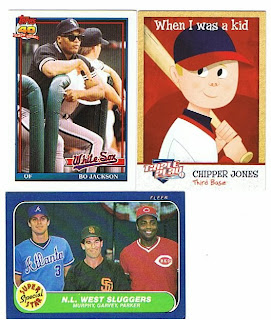 Bo, Chip, and Murphy! Let's see the back of the Chipper card: 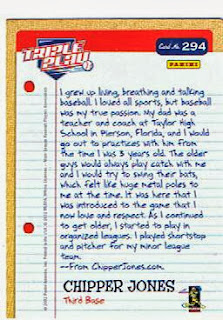 When you're a non-MLB licensed card manufacturer, you gotta do what it takes to fill up card backs. Apparently, that includes cutting and pasting from players' websites. 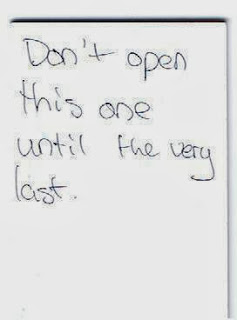 Now, this ought to be a good sign! (This particular bunch of cards was for my birthday back in, oh, February. I'm playing catchup.) 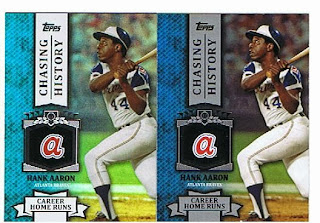 Some 2013 parallels of fellow Alabama boy Hank Aaron. So far so great! 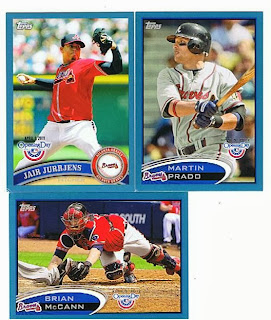 I really wish all blue parallels could be numbered cards, like these Opening Day parallels. 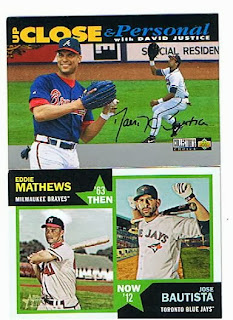 Up Close and Personal with David Justice? Sounds like something that would be on VH1. The Heritage insert below it is, in contrast, a neat idea (design-wise). 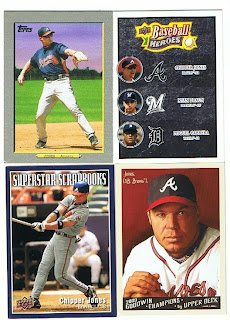 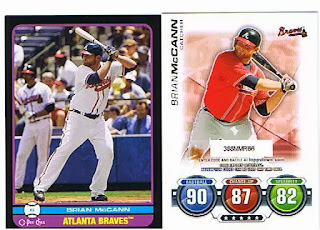 I feel like I have almost as many black OPC parallels as I do white base ones from that 2009 set. Most of these have in fact come from Wes. 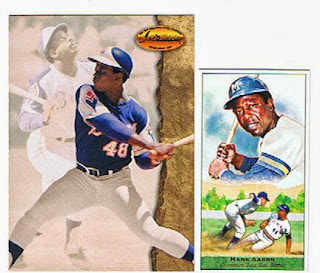 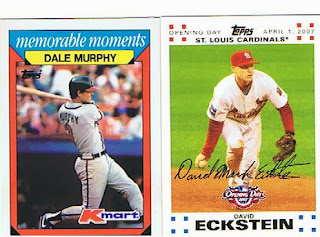 And PC needs as well! 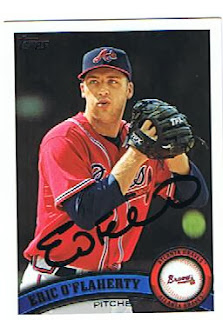 Eric O'Flaherty is about to be able to stop signing autographs in the clubhouse and get back on the field-according to the AJC he's recently started rehab from Tommy John surgery. Nevertheless, this is a pretty sig from what I believe was a through-the-mail autograph request. 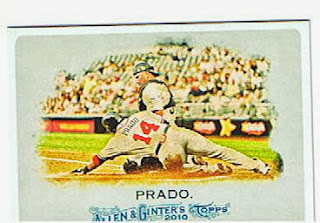 Why Allen and Ginter is not really that lame.
It's so weird how pictures of athletes such as Freddie on cards can make them seem so young. Wearing #30 just yesterday, now he's getting ejected in games against the Brewers. That said, Carlos Gomez was rather a jerk. 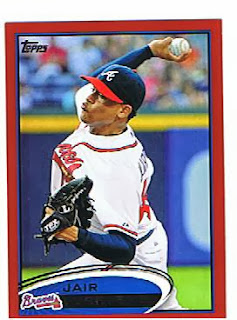 Target red parallel of Jair Jurjenns! I almost never get these, so receiving this one was fantastic (pun completely intended)! 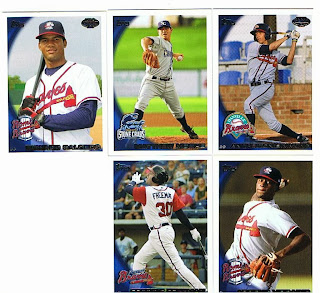 Salcedo and Simmons and (another) Freeman, oh my! Even a Matt Moore in there for my PC! A great way to round out the package, and a big thank you to Weston over at Fantastic Catch for the trades. Till next post, see you on Listia!

What would you say is one of the best things about collecting baseball cards? I would probably say...going to card shops. This is the second card shop in Alabama I've been to (shoot, second one overall), and would you look at that, you can't even tell from the sign! 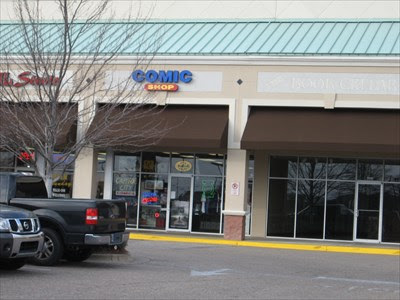 Capital City Comics has not only comics (though that's most of it): I was able to find Topps from the last 3 years, as well as some junk wax boxes and even a little vintage. I spent a grand total of one dollar, but feel like I got the better end of the deal. I was able to snag some pickups for trade partners, which is kind of where I'm at right now in collecting, for better or worse. The shop was a pretty good place to pick up some wax, and if you find yourself in Montgomery, Alabama anytime soon, it may be your best card shop option.

After checking out CCC, I had the chance to go with a family member to a mega-fan mancave. He runs a sports memorabilia website as well, and sells plenty of autographs and stuff on eBay. Visit his site if you're looking at getting any Alabama Crimson Tide, Auburn Tigers, College and Pro football, baseball, sports certified autographed memorabilia and tickets - it's http://www.viceauthenticsmemorabilia.com

One general question: for you autographers: what kind of pens do you like to use best? One I was recommended to use is the Uniball Jetpen (blue ink). But what do you use, for baseballs especially? Let me know what you think!

Look for some new trade posts coming up next!
Posted by Chunter at 3:37 PM 1 comment: