The 'Stuff' Great Trades are Made of!

Man, I can’t tell you how much I’m excited about Spring Training. From the meaningless games meant almost solely for the sake of getting pitchers loose to inducing month long injuries to some Yankee players, it is just one big part . Hey, Bud, bring on the World Baseball Classic! We want more baseball, darn it! Gosh.


Sarcasm aside, I think the point of spring training is to give guys like Gonzalo Lopez a day in the sun. 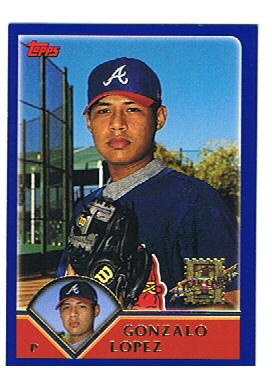 Or, perhaps, warm up Jake Stevens for a long season of major league benchwarming. 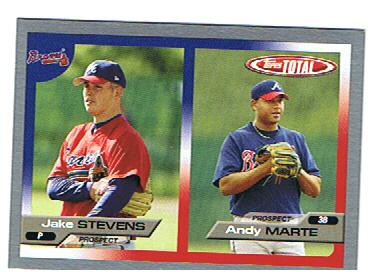 Oh, who am I kidding. You know the crowds in Florida and Arizona are hoping to catch a glimpse of guys like Dan Uggla, not Kevin Gryboski.
That doesn’t mean I can’t like their cards though. 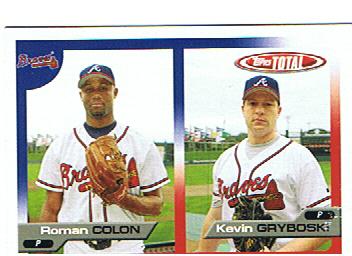 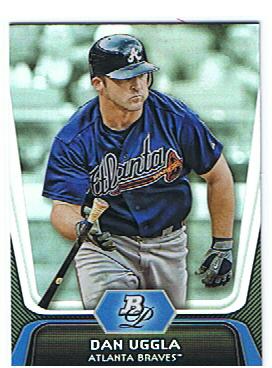 Schuyler of blog Schuyler's Stuff and I started a trade towards the end of 2012, and just completed it in the past week or so. All cards in this post were a result of the trade, which was well worth the wait, I would say. Schuyler sent me some terrific stuff. Two plastic baggies full of mostly 2000-2005 era stuff, not to mention this classy Tim Hudson Heritage relic from last year's release. 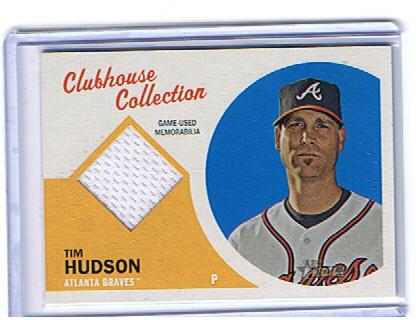 Schuyler is also a Bowman brand collector, which was evident as he included this chrome Arodys Vizcaino prospect card. Vizcaino, hailing from the Dominican Republic, is a 22-year-old fireballer who went to the Cubs in the Paul Maholm trade. 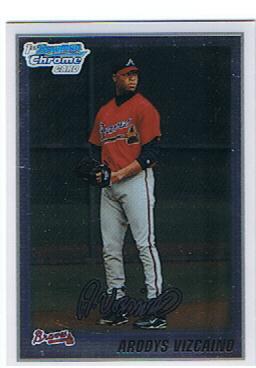 These were some sweet Rafael Furcal cards too, from 2005 UD and 03 Bowman Heritage. That has got to be the happiest base slide I've seen on a card. 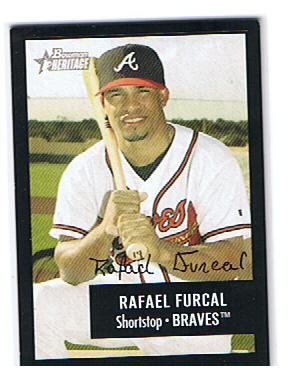 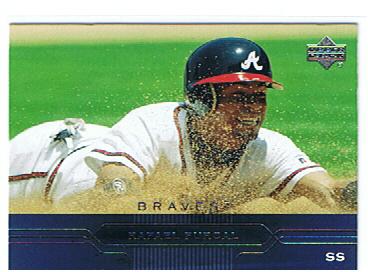 And of course some cards for my player collections. These Chipper cards were pretty awesome: 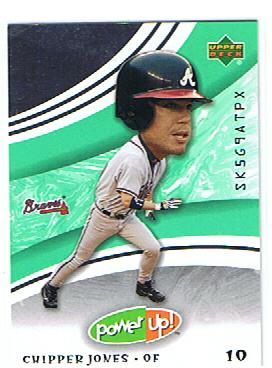 ...And a Maddux die-cut. The photo is sharp, but not sure what Donruss was, um, thinking for the design outline, which resembles the letter Z. 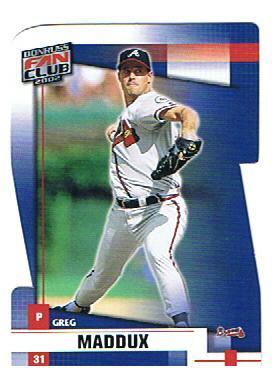 This was my favorite Bo Jackson card. 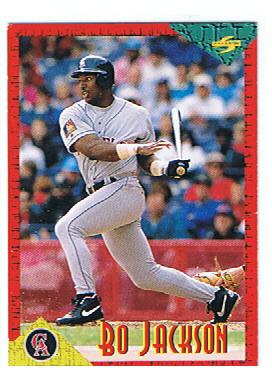 All in all, good stuff from Schuyler! Thanks for the trade!
Posted by Chunter at 6:03 PM No comments:

Pop Quiz: What do Ed Olwine (1984-1987 major league baseball player) and Taylor Swift (an American singer/songwriter) have in common?

Was going through my 87 Topps doubles and realized I have three or four extra Ed Olwine cards. Out of ennui and boredom at seeing ol' Ed's card front, I checked out the back.
And here is the point. See where I used MS Paint to point out Ed Olwine's hometown?

﻿
Hyannis Port, besides being Ed Olwine's home as of 1987, is an affluent summer community of 115 residents, according to Wikipedia. In the summer, the population is 573. Last year, Ms. Swift reportedly bought a house in the same neighborhood as some Kennedys. So the answer, then, both owned property in the same town as 571 other people (including the Kennedys)!

In digging up recent stuff on Olwine, particularly, I ran across this article in the AJC. It seems Ed has gone into real estate in the past decade and a half, which is interesting. Wonder how much he flipped the Massachusetts house for?

By the way, another fun fact about Ed: Despite the outward vestiges of team loyalty in the stat line, Ed was owned by 5 different major league teams, including the Mets, White Sox, Royals, and Yankees, though he never appeared in a game for any team but Atlanta.

Olwine seems like an amiable guy, judging from the interview in the Journal-Constitution. Worth a TTM request? Maybe, but then what to do with the other three Topps cards? :)
Posted by Chunter at 5:47 PM No comments:

Peter Michael Moylan: a Profile and a Cardboard Tribute

Lost in the vortex of coverage that was the Justin Upton trade was the departure of Peter Moylan from the Braves. Now with a minor-league deal for the Dodgers, Pete will try to stay healthy and work back up to the bigs with a 34-year-old arm.

It's been an interesting ride for Moylan, as he made a well-chronicled journey from selling drugs for a living (okay, so they were pharmaceuticals) in Australia to the World Baseball Classic to Atlanta, Georgia, USA. The man has inked arms and a Twitterfeud with Nickelback on his resume, and apparently moonlights as a Pennsylvania dentist (that last item may or may not be completely accurate). He describes himself on Twitter as "an Aussie bloke living the American Dream."

Moylan was recently non-tendered by Atlanta, which is tantamount to saying "the Braves didn't want to pay him as much as his contract called for, so they released him." He's been bitten by the injury bug in the past couple of years, so that's understandable.

He's not a very uptight guy in the clubhouse, it seems, as Moylan was named by the majority of Braves players in a fan magazine questionnaire as the funniest guy on the team. This in terms of his jocular humor, I'm pretty sure.

I have only 2 cards of Moylan: his 2011 Topps Update base card, and the gold parallel. Exciting stuff, I know. Moylan only has a handful of cards, though, so I have a bit of an excuse. This based on the inventory on COMC... 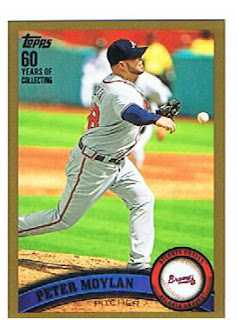 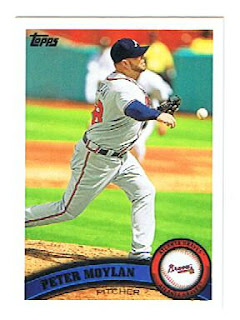 ﻿If you haven't been able to tell from my monologue, I'm going to miss Moylan, maybe more than Prado. Just his personality, I think, is enough to keep young guys like Kimbrel and Venters loose in the clubhouse. Like many managers say, "I hope he does well-unless he's playing us." Have a great year Moylan, except against the Braves!
Posted by Chunter at 4:16 PM 1 comment:

Cards in Miniature from Community Gum!

Have you ever wondered what would happen if you willingly never posted a trade? I'm too scared to find out, but my hypothesis is that the cards you traded for would vanish. Anyway.

In the not-so-distant past, Jon of Community Gum busted a box of Topps Mini cards, which I believe (hypothesis again) only got into the hands of those who did like he did and ordered a box, or were members of the 5 Star Club. I have not seen these anywhere personally outside of CG's blog. If showing 'fashionably late' to blog posts is just your style, plenty of cards appear to be left.

The base cards are basically the Reader's Digest Condensed versions of 2012 Topps, but knowing how unlikely it was to get at these outside of the Gated Community of Gum, I bit and sent Jon some Maduxxes (Maddi)? See for yourself what I got back! (If you have the Chipper Jones card from this set by chance to send this-a-way, you will be rewarded.) 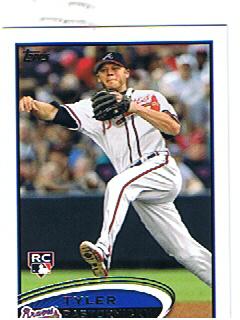 Scan chomped off the bottom of this card, but here's Tyler Pastornicky. Braves manager Fredi Gonzalez said in a recent interview Tyler may be the next "Martin Prado." Read: Utility guy. If he can hit decently enough, though, that'd be fine by me! 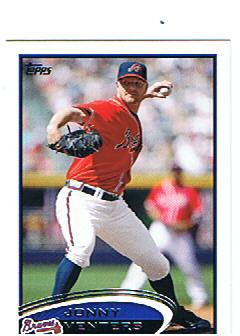 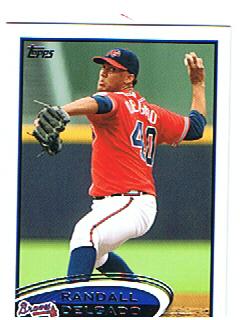 At the time this card was scanned, Randall was a Brave. He's now a Diamondback by way of the Justin Upton trade. 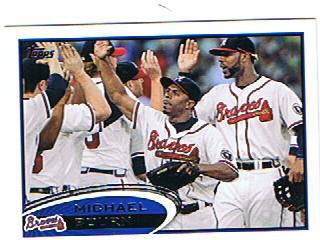 The height discrepancy between Bourn and Jason Heyward behind him is funny. Not sure what to think about having BJ as a CF this year-maybe Frank Wren thought that two Uptons together can't both be terrible?

That is all-thank you Jon!
Posted by Chunter at 6:44 PM No comments:

Picking things back up with the blog now! Now that Blogger has fixed the photo upload button, the next few posts will be recounting a string of recent trades. Like this one, with irondequoit of Old Foul Cardboard:

OFC shot me an email asking if I were interested in exchanging some of his unwanted Chipper Jones cards for Yankees, Bruins, Jim Palmer, and some others. You can see what I sent his way here.

On to the spoils!

I've never seen any cards from this set before: 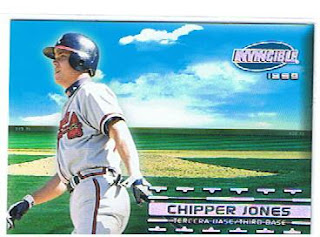 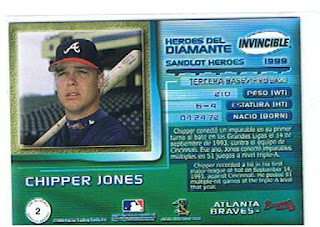 ﻿Pacific was and is always an interesting card manufacturer. It's notable, for example, that though this card is a 1999 issue, the highlight is from Chipper's rookie season 6 years before. Okay. 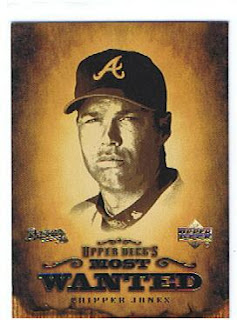 This card is cool, in the words of a blog title. I think CJ can pull off the "hardscrabble" Western-look better than, Barry Bonds, though. 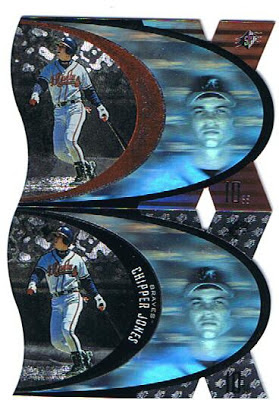 Chipper Jones looks like a phantom in these 1997 SPx cards! The bottom is, I think, a silver parallel of the top version. The back is completely in black and white instead of being full-bleed color, like the red base card. 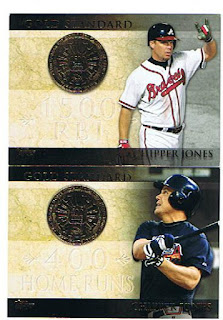 Some recent-year stuff was in the package too! Question: If diamond- and gold-themed cards have been the thing for 2011 and 2012 Topps, what is the motif for 2013? 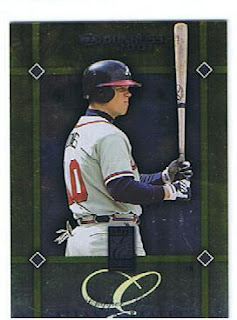 Closing out with a Chipper Jones sneer. This is actually a pretty classy-looking card; it is a 2001 Donruss Elite Series numbered 0719/2500.

Thanks to OFC for the Chipper-filled trade!
Posted by Chunter at 9:54 AM No comments: