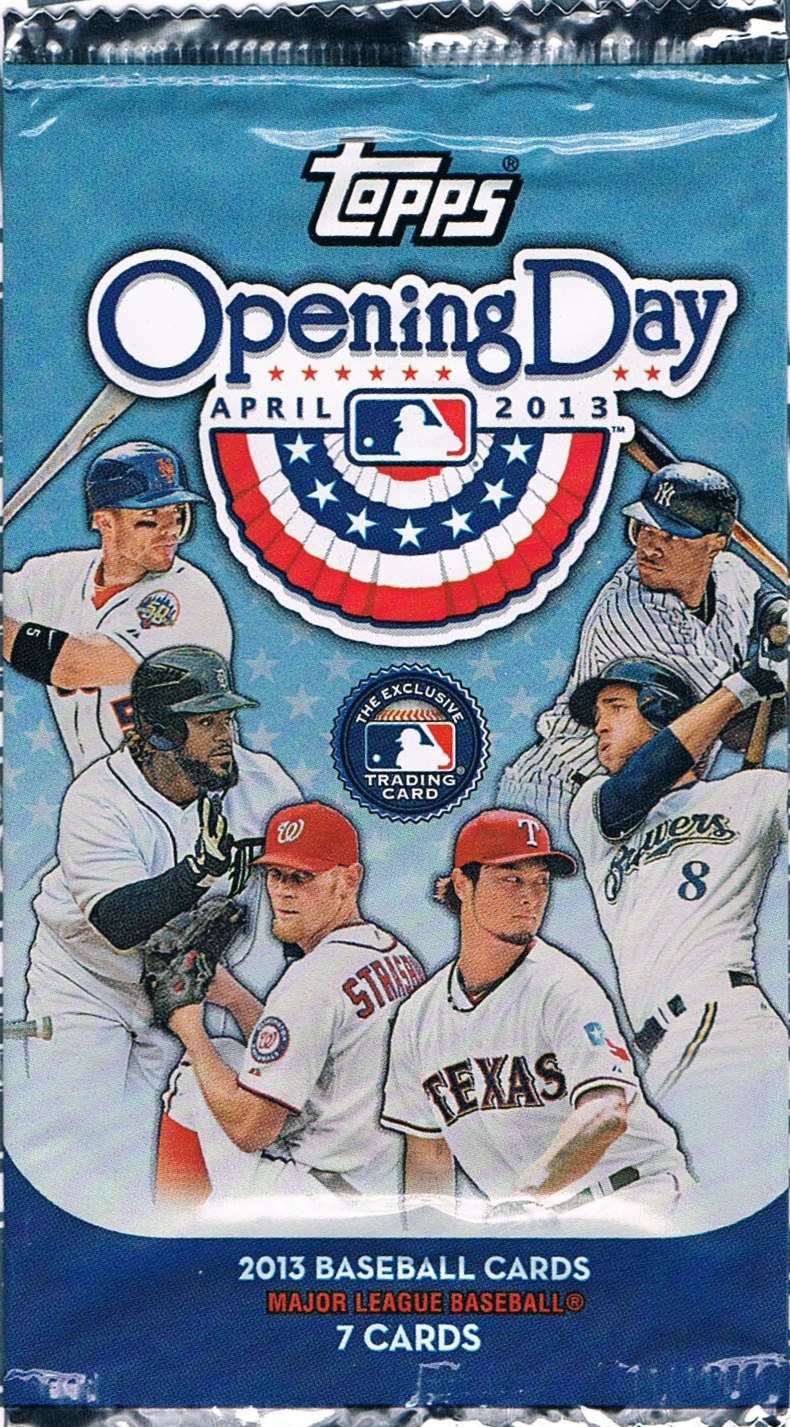 So how about a rack pack rip of 2013 Opening Day? You know, the set that celebrates a semi-holiday that occurred nigh a month ago? Hey, why not? Let's get to work on ripping (what Eminem might call) some cold product.

Interestingly enough, the first card pulled out of a 2013 pack for this Braves fan is the card that took the longest to get for the S1 rendition of Topps. Oh, and it's a Brave! So far so good.

2 out of 3 guys I knew before this pack rip. Looks like Aoki left the third base coach hanging there.

﻿Hey look! Mascot card! Flying Met! Bryce Harper! The Harper insert, and all other cards without a "keeper" subtitle, is and are up for grabs.

Another Harper insert! This along with a bearded Bumgarner and a clean-shaven Cano. 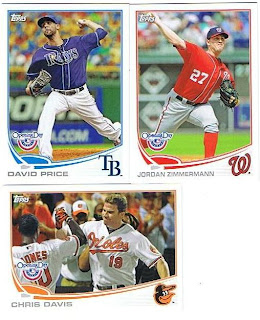 David Price is currently mired in trade rumors right now. The Rays have a history of dealing pitchers before having them suck up payroll, hence the rumors abound. Pitcher Zimmermann currently has the most wins for the Nats, and Chris Davis is just excited about geting a fist bump-looking...thing.
﻿﻿﻿
﻿﻿﻿I really don't have anything to say about these guys. So I won't. Holding the Wainwright card for any of my three Cardinal-collecting trade partners.

Hey, it's that Jurickson Profar guy. Between Profar and Oscar Taveras, there's a lot of Rookie of the Year-type conversations going on in the blogs. Oh, and the guy you saw of the front of the pack - Prince Fielder.
﻿
﻿A crop of young players. Starlin Castro, with an SI cover story behind him, had a mini-hitting-streak going for 14 games. Addison Reed, meanwhile, has been racking up saves. And Adeiny sits on the DL for the miserable Marlins. I would say something along the lines of, "Stinks to be a Marlin," but I can't bring myself. Jeffery Loria, man...
Another Marlin, a V-Mart, and Cahill on the hill. Those guys in the background on the Martinez card seem to be in a rather unsafe location.
﻿ ﻿
﻿﻿

Jemile Weeks? Minor leaguer? Pssh. Give me Troy making news with childhood mullets anyday.﻿ Shoot, I'll post the picture to save a click:

As Deb would say, "Now, make a fist. Slowly ease it up underneath your chin..."

Thus ends a magical frolic through a 2013 Topps Opening Day rack pack. I do hope you enjoyed it. Please feel free to claim any cards I haven't tabbed to keep. Though I would love any sparkly Braves paralells if you have 'em, I don't expect anything in return. Adios!
Posted by Chunter at 11:42 AM 1 comment:

Welcome back to the Trading with Dawgbones series, part 2! With a relic involved in this trade that I saved for last, you don't want to miss this! 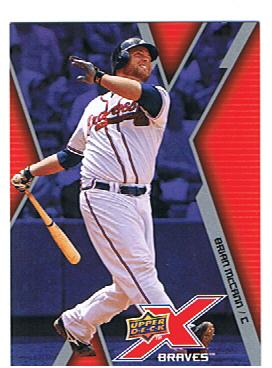 Upper Deck X is a product people seem to love or hate. I like it myself, and the 2009 version (which this McCann happens to be) is my personal favorite rendition of the product. (Pushes glasses back up nose.) 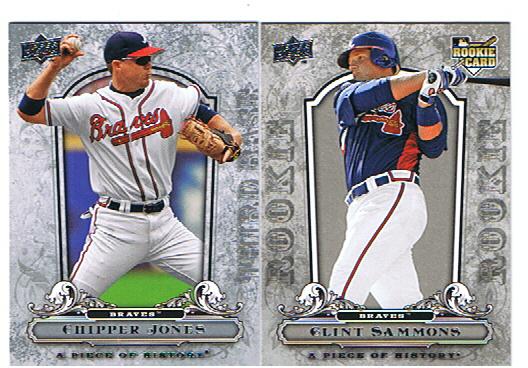 Some Pieces of History, also of Upper Deck origin. The Chipper Jones card is, appropriately, card #10 in the set.
2001 Fleer EX Greg Maddux.  You can't really tell from the scan, but the front seems to have been glitter-fied. Fun fact off the back: 2000 was a year in which Maddux had a better record against the entire American League than he did against the Expos (3-0 vs 2-0)! 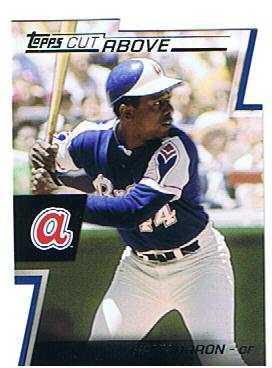 I’ve fallen behind in keeping up with inserts as 2012 has become 2013. I had to look at the back to see that this is nice Hank Aaron die-cut from last year’s Topps set. 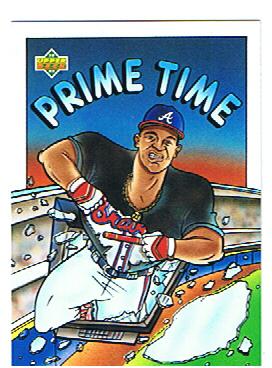 This card is rather bizarre. It took several different glances at this card to see that the jersey-ripping fellow is actually emerging from a TV SET. In the middle of a baseball (?) park. The back identifies him as “The man who is called Prime Time,” and Deion Sanders is apparently his “Alias.” Um, ohhh-kay. 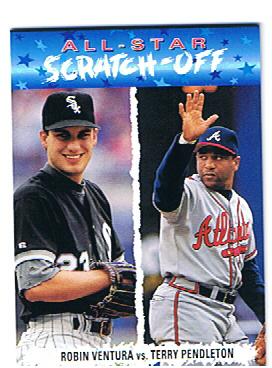 I played one of these scratch off baseball cards one time-I think it was the Expos vs. Pirates one, so there wasn’t a whole lot of value lost from that card. Nice shirt Ventura’s wearing. 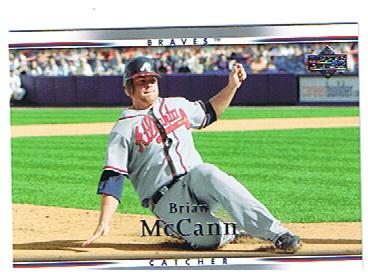 Third-year card of B-Mac-this is a nice shot. My great-granddad, a Braves fan, would often refer to Brian as “a big ol’ boy.” Pretty accurate description, Lol. 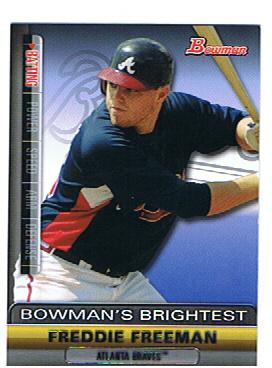 This is the first Bowman’s Brightest insert I have received, and it’s of Freddie Freeman. Freeman will be out of commission for the next couple of weeks due to a strained oblique. We'll see how that affects the current series against the Nats.
﻿ A couple of exes. Ex-Braves, I mean. Mike Hampton is retired as of 2011 and Trey hasn't played in the bigs since 2003. I like the vintage design on the Hodges card, though. 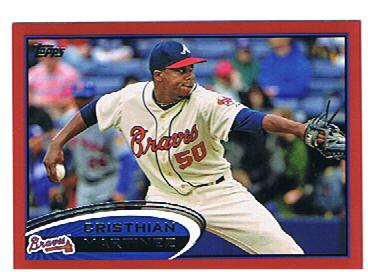 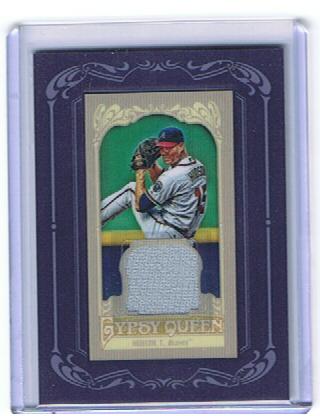 This was probably the highlight of the trade-a 2012 GQ Tim Hudson Mini relic. I like classy cards, and this  card definitely fits that description.
Thanks to Dawgbones for the trade! Dawgbones is a great guy to trade with; go and give his blog a look!
Posted by Chunter at 11:14 AM No comments:

After an 8-1 start, the Braves head to Washington to face the Nationals in a 3-game weekend series. The Braves haven't begun a season this well since 1994 (13-1), and I don't expect them to eclipse that against the Nats. But it should still be an interesting series, for sure! Evan Gattis has been a nice surprise this year.
I'm still behind in trade posts, but this helps catch me up a little. This was a good trade too, with blogger Dawgbones of blog "Dawgbones, a Phillies Phan!" You can read about what I sent him here. Without further ado... 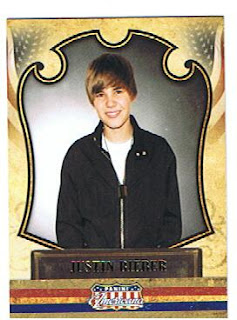 One author I really like has said he thinks of Canada as the “fifty-first state.” I guess that’s what Panini was thinking when they included JB in the Panini Americana set. I do not know, though, why Dawgbones included Biebs in the card package. 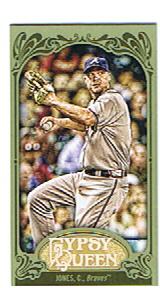 Holy Green Gypsy Queen minis, Batman! I know why this was in the package, as this mini card was actually one of the Queen cards that ignited this trade. A nice add to my Chipper Jones PC!
I don’t really remember Zack Taylor at all, which is not surprising, given he was a mid-to-late 1920s catcher for the Boston rendition of the Braves. I learned this from the back of this Sporting News card, and also that he was the manager who sent Eddie Gaedel (the midget) to the plate for the St. Louis Browns on pain of death by Bill Veeck. 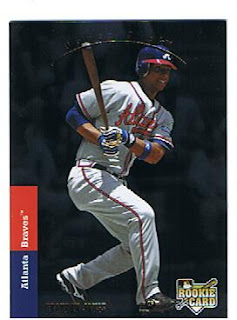 This card makes me think “hologram” more than anything else (though it isn't really). It is also a rookie card of the other Jones on the Braves-not Andruw, not Chipper, but Brandon. Brandon is now with the Southern Maryland Blue Crabs, hosts of the 2013 Atlantic League of Professional Baseball All-Star Game. 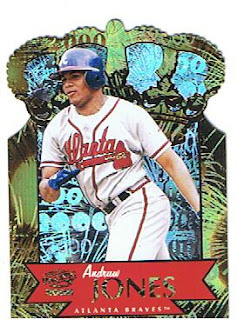 Another shiny card with a player named Jones! These Pacific cards are indescribably flashy. Like gold jewelry on every appendage of someone’s body kind of flashy. I really like this card, though; the crown gives it a nice flair. 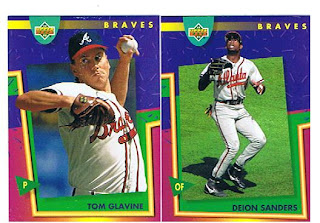 These were some colorful cards. 1993 Upper Deck Fun Pack. I show the Tom Glavine because it's Tom Glavine, and the Deion Sanders because on the back... 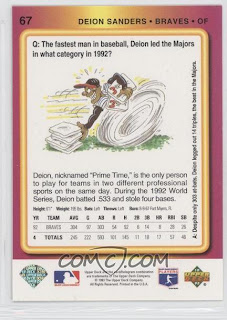 he looks like the Tasmanian Devil, and is praised for being the fastest man in baseball. Considering Deion apparently has whirlwind for legs, UD wasn’t going out on that much of a limb, I’d say.
I'll post up the rest of the cards in a bit. Thanks to Dawgbones for the trade!
Posted by Chunter at 11:00 AM 2 comments: 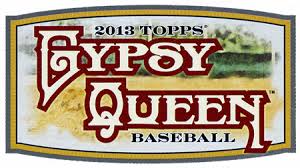 Andrew of the good old Andrew's Baseball Cards blog is hosting a group break. The skinny: 2013 GQ Hobby Box, 240 cards per box, get one team of choice and one randomized team for $12 in Washingtons or Paypal payment.

Braves are 2-0 after last night's win over the Phillies. Let the Upton era begin!

I welcome the start of the season as I try to forget about my horrible, no good, very bad bracket. I never do brackets, and after a pretty okay start (thank you, Oregon) I was feeling pretty high on mine. I then went on to pick a grand total of 0 correct Final Four teams. Darn Wichita State/Michigan/Syracuse! I take the blame for not picking Louisville.

One of the cool things about blogging is coming across new ones. I was recently able to make a small trade with Josh of one such blog, Pence, Nix, and Pierre. I hope that by seeing what I got you'll be motivated to help Josh add to his collections of, well, Pence, Nix, and (Juan) Pierre. 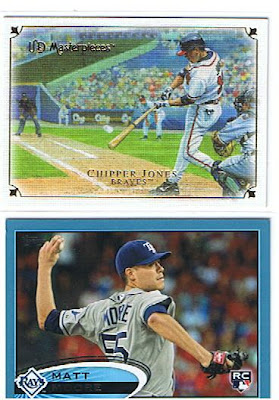 A couple of horizontal shots. I still haven't received a Masterpiece card I didn't like. 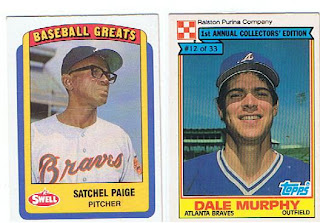 These were some oddball issues I hadn't seen before. The one on the left is a 1990 Swell Satchel Paige. At first I wasn't sure how I didn't know Satchel was a Brave, but Google told me he wasn't a player but a coach in the 1960s. 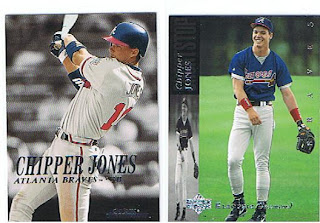 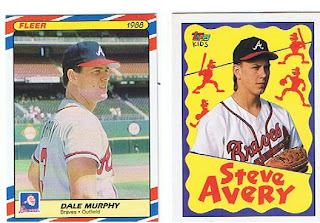 Another Dale Murphy card, and a colorful 1992 Topps Kids Steve Avery. The silhouettes in the background really make that card for me. 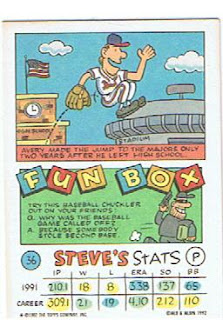 This is the back, depicting Steve's giant leap from high school to a major league ballpark, as well as a criminal with a handgun. Ah, the (relatively) politically incorrect '90s. 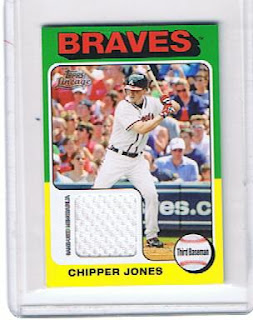 To close out with a bang, Josh also sent me my first Chipper Jones relic card! From  2011 Lineage, this is a sweet addition to the PC!

Thanks to Josh for the cards, and the trade!
Posted by Chunter at 5:31 PM 1 comment: