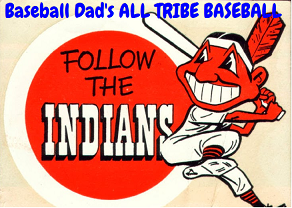 Awhile back I claimed a card in Jack of All Tribe Baseball's card giveaway. In addition to my claimed card (an Astros Toy's-R-Us parallel) Jack generously threw in a bunch of set needs. And here they be: 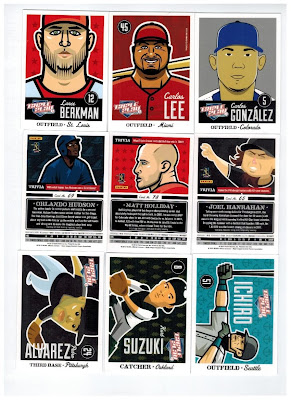 First, a bunch of cards off my 2012 Panini Triple Play set. I'm still working on this-find my wantlist here. 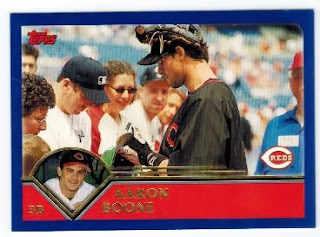 Also some cards for my 2003 Topps set. Here's an Aaron Boone Reds card. Do any bloggers collect autograph signing cards like these? 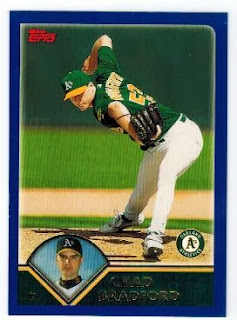 Nice submarine delivery, Chad. Nice turtleneck too, by the way. 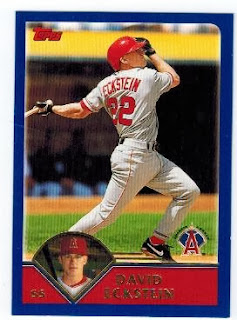 Here we get into some overlap with my David Eckstein PC. If anyone has a copy of this card, I'd take one for the PC and keep this one in the set.
You don't see this pose very often on a card...if this shot was taken at Coors field though, It couldn't have been a rare occurrence. 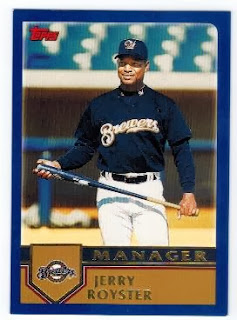 Jerry looks too young to be a manager-kids these days...

And a trio of Braves to finish it off. I don't know how I could not like that throwback uniform Smoltzie is wearing. Interestingly, it doesn't look like Bobby Cox has had any cards since 2010, according to the venerable Trading Card Database. Just wait till Bobby's eligible for the Hall of Fame next year; Panini will be churning out unlicensed cards of him like there's no tomorrow.

So there you have it. Thanks so much to Jack, and I look forward to sending you many Indian cards in the future!
Posted by Chunter at 12:31 PM No comments:

Cards from the Tim Wallach Collector!

I think one of the things I've enjoyed most about reading card blogs is discovering the player collectors who collect that obscure 1990s player, rather than your standard Albert Pujols, Derek Jeter, or Chipper Jones (as I do). Give me the Tino Martinez or Tim Wallach collector any day, and I'll take your Chili Davis cards.

It's our Wallach blogger who sent me some nice Brave cards recently, after I passed on some cards of the Expo to him a few months ago. He's on a mission. A mission to....

I wasn't expecting anything back, so I was pleasantly surprised at seeing these: 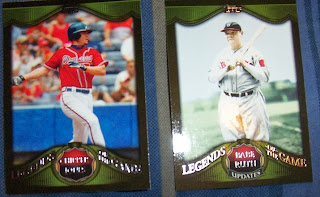 A couple of Braves greats, including Babe Ruth. A few years ago Topps had fun with Ruth as a Brave, including this dandy of a card:

Also in the package were a couple of Murph cards I needed for the PC- a 1981 Fleer and 1988 Topps Big Dale Murphy. Does anyone have many of the Topps Big cards? I was struggling to find a sleeve large enough to hold Dale without smothering him. 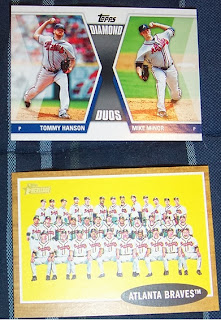 One of the many Diamond Duos inserts and a Braves team card from 2011 Topps Heritage. Tommy Hanson had a rougher year in his first season with the Angels, going 4-3 with an ERA of over 5. 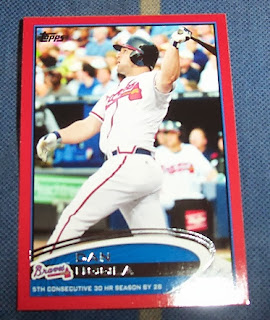 This Target Red is actually a Checklist-2012 Topps Checklist #579. From the green out-of-focus logo on the dugout wall, we see that Uggla was playing in a game on Peachtree TV. 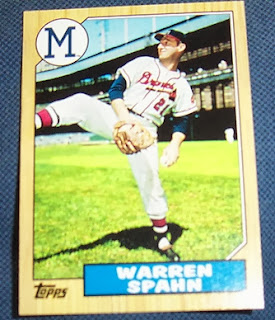 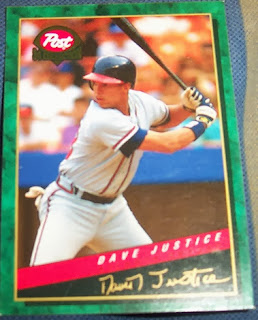 And last, a bootleg unlicensed Post Cereal card of Dave Justice, complete with facsimile signature to make it fully semi-official.

Thanks to my friend at the Tim Wallach blog, and good luck collecting! 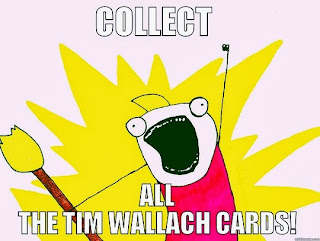 Trade with a Phillies Fan! 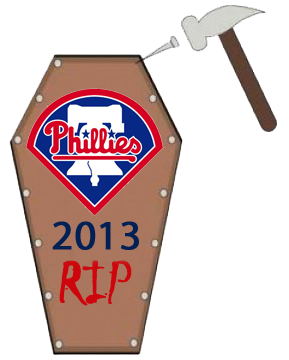 Back when I made this trade with Josh of blog Pence, Nix, and Pierre, Ryne Sandberg was still the Phillies first-base coach, and the Phils had an outside shot at the East. (The Brave-beating Dodgers were in the NL West cellar at that time, which is saying something.) Seems long ago now that the Red Sox have bearded their way to a 3rd World Series title in a decade, spawning awful Nike shirts and gladdening the hearts of Bostonians, and making my August Fenway visit feel approximately 4.3 times cooler.

Guess who Andruw Jones is playing for now? Yankees? Rangers? No and no. Jones in fact spent 2012 with the Tohoku Rakuten Golden Eagles of Japan, along with another former Brave, Takashi Saito.
This card is a nice one, though the serial numbers slightly resemble a Wal-Mart receipt.
Klesko power-swinging his way through the glitter!

Tim Hudson has filed for free agency, along with Brian McCann, Eric O'Flaherty, and Paul Maholm. It would be nice to have a strong Huddy for the next year or two, but the Braves have a track record of not being overly attached to players (like Andruw Jones, for example) past their primes. I expect Hudson to sign elsewhere, but I wouldn't be shocked to see him return. The latter would certainly be nice, but the Braves' cupboard is full of pitchers for the 2014 rotation.
Gold parallels of backup infielders? Yes.
Remember how Andruw Jones plays for Tohoku Rakuten? They have been playing for the World Nippon Series against the Yomiyuri Giants (who you may have heard of). Best I can tell, the series has gone to six games, and Andruw has become the fourth player to hit a home run both in the Nippon Series and the World Series. (Hideki Matsui would be the only other one you might guess, followed by Johnny Logan and Roy White.) 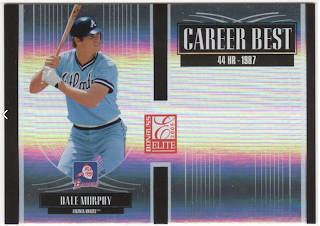 Couldn't resist sneaking in a Listia win. 762 credits won me this 2005 Donruss Elite Dale Murphy, which is numbered 0526/1500. How much is a credit? I feel like Harry Caray on Saturday Night Live trying to implement hot dogs as our national currency, "20 hot dogs would equal roughly a nickel..."
Some 2008 UD Documentary. This set has gone mostly-forgotten, except as the object of ridicule, on the blogs. It's not a bad design, though. Did anyone ever try to collect all these? It would make a good blog feature...
This was a nice add. Andrelton was awarded his first Gold Glove Monday night, and I dare say he deserved it. Maybe a 5.4 WAR sounds impressive only to me. It's good to know Simmons has a few years before he's arb-eligible in 2016.
Last, a Kimbrel second-year Heritage. Classy.

Thanks to Josh for the trade! Till next post...
Posted by Chunter at 12:31 PM No comments: